THE ANDEAN COSMOVISION OF THE KALLAWAYA OF BOLIVIA 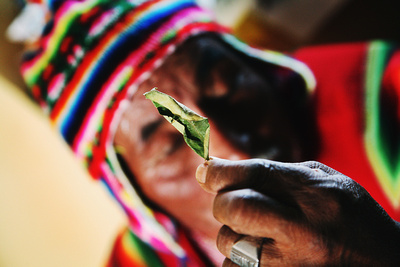 The Kallawaya doctors ("médicos Kallawaya") or "Callahuaya" represent a small ethnic group of the Cordillera Apolobamba, inhabiting just a few villages in the upper Charazani valley: they can be found in Charazani, Curva, Amarete, Caata and Callaya, in the Bautista Saavedra Province on the north of La Paz in the Plurinational State of Bolivia.

The Kallawayas are renowned herbalists in Andean countries: they cure with plants, minerals, animal products and complex rituals. Peasants refer to them as "Qolla kapachayuh" or "lords of the medicine bag": they have obtained this title because of their knowledge of up to 900 plants used for curing.

Kallawaya doctors are enigmatic travellers who carry colorful bags, “khapchos”, decorated with coins and full of plants: they know the medicinal properties of up to 900 different species of plants, which they collect during their long journeys. Often they travel on foot, through the ancient Inca trails in the tropics, mountain valley and highlands plateau reaching over 5000m heights. They can walk as far as to Peru, Ecuador, Argentina, Chile and Panama and on the way they find a vast natural pharmacy of plants to draw on.

The Kallaways are also powerful ritual specialists and combine their knowledge as herbalists with the supposed ability to predict the future by reading coca leaves. Before their departures to heal those who suffer from physical or spiritual illnesses, they perform a ceremonial dance: the choreographic “llantucha” of “suri” are clothes made by natural textiles and feathers used as protection against the elements. Groups of musicians “Kantus” play drums and pan flutes to establish contact with the world of spirits, before visiting their patients.

Their language is secret in the sense that it is passed only from father or grandfather to son or grandson and it is supposed to be only for initiated men and not transmitted in normal family situations. Although used primarily in a ritual context, their language also serves the purpose of everyday conversation between Kallawayas for trading amulets, plants and paraphernalia.

Women play a different role in the Kallawaya community: they are responsible for gynecological matters, pediatric patients and serve as midwives. Normally they assist their healer husbands, when back from a journey, with the preparation of herbs and infusions. They look after their family, home and children. The traditional knowledge is rarely transferred in the form of a secret language to women and if a practitioner is without sons the tradition will not be passed to daughters.

Their life is in complete harmony with nature, they worship the land of the mountains and often perform offerings to the Gods of the mountains, with a ritual known as Pacha Mama which, in its different forms, is used also before, during and after each healing ritual.

Pacha Mama, Mother Earth in Quechua, is the origin of all forms of life, human beings are just a natural extension of the Pacha Mama. She represents heaven, hell, God, and satan. Since the early 1500s when Pizarro led the Spanish and conquered the Incan Empire, the Incans gradually adopted the European catholic symbols as a façade to their own beliefs. While praying in church, the locals often visualize Pacha Mama, who is associated here with the Virgin Mary.

These days the Kallawaya no longer travel as far and wide as they used to and their number is unfortunately dwindling, as fewer sons acquire their fathers’ knowledge.

Furthermore, the traditional Kallawaya way of life has come under threat from acculturation, which may lead to the disappearance of this extraordinary body of medical knowledge. The tradition is also affected by the lack of sufficient legal protection for indigenous communities, particularly in the most remote regions.

Another risk to the Kallawaya way of healing is the difficulty in obtaining recognition for their traditional knowledge in comparison with modern medicine and mainstream medical research. However, a growing number of Kallawaya are now living in La Paz, where their medical practice is still in high demand. 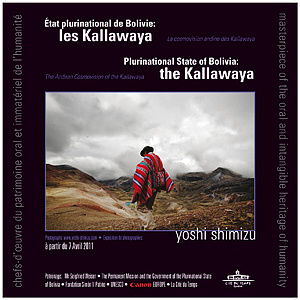