THE MASK DANCE OF THE DRUMS FROM DRAMETSE OF BHUTAN 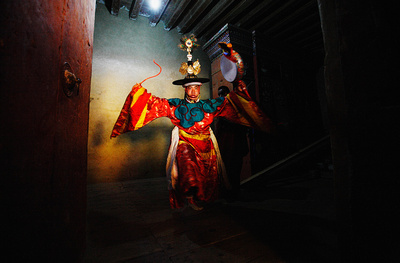 Bhutan's preeminent sacred mask dance is the Drametse Ngacham, the "Mask Dance of the Drums from Drametse" (nga translates as "drums" and cham as "mask dance"). While the original home of the dance is the Thegchog Ogyen Namdroel Choeling Nyingmapa monastery in the East Bhutanese village of Drametse, the dance is performed throughout the country at festival time. The dance manifests the deities as seen in a vision by a sixteenth century Bhutanese lama saint. The Drametse Ngacham is performed in honour of the eighth century founder of Himalayan Buddhism, Padmasambhava, known as Guru Rinpoche. By watching this celestial dance, people gain merit towards liberation or avoiding rebirth in the lower realms. The dance also restores peace, tranquility, prosperity, and good fortune to the community and to the whole country. In 2005, UNESCO proclaimed the sacred and highly revered Drametse Ngacham a Masterpiece of the Oral and Intangible Heritage of Humanity.

Drametse Ngacham was initiated in 1518 by the Bhutanese saint Khedup Kuenga WANGPO, a (descendent) SON of Pema Lingpa (1450-1521), the venerated reincarnated spiritual heir of Guru Rinpoche; Pema Lingpa was a disciple of Padmasambhava via a previous incarnation. While engaged in intensive meditation, Khedup Kuenga (Gyaltshen) WANGPO entered the celestial abode of Guru Rinpoche and witnessed a dance performed by its heroes and heroines. He was then instructed by Guru Rinpoche to return to the human world and establish the tradition of the Drametse Ngacham as a means of transmitting Mahayana Tantric teachings and for the benefit of all sentient beings.

After carefully noting the choreography, Khedup Kuenga (Gyaltshen) WANGPO returned to the village of Drametse. There he taught the dance to the monastery's lay practitioners. The monastery had been established by a DAUGHTER of Pema Lingpa, a nun known as Ani Choeten Zangmo, who is considered an incarnation of a dakini, a female celestial being. Her body is enshrined in a chorten or stupa in the main temple of the Thegchog Ogyen Namdroel Choeling monastery and is worshipped.

For almost five centuries, the Drametse Ngacham has been performed twice a year at the three-day Drametse Tshechu (festival) organized by the monastery. While other dances are performed, Drametse Ngacham is the most significant. According to Buddhist beliefs, the sound of the drum is a sign of victory and jubilation. The Mask Dance of the Drums, therefore, celebrates the victory of Buddha dharma. People from Drametse and neighbouring villages attend the tshechus to renew their bonds to Buddhism and to obtain blessings.

For over four centuries the Drametse community was the sole custodian of the dance. Since the late nineteenth century, versions of the Drametse Ngacham have been performed at tshechus held in monasteries and dzongs (seats of civil and religious power) all over Bhutan. Today, this dance reinforces the cultural and spiritual identity of all Bhutanese. But it is in its native village of Drametse that the Mask Dance of the Drums is most highly developed and complete.

he Drametse Ngacham reflects the Buddhist concepts of Samsara ("wheel of suffering", the uncontrolled cycle of birth and death) and enlightenment. The dancers are trained in Tantric visualization so as to invoke the deities of the celestial world while performing the dance. In fact, a three-year and three-month long retreat is recommended. The dancer must also have a strong faith and belief in the spiritual power of the mask dance. Supported by visualization and invocation, it is believed that a dancer who performs the dance in the prescribed manner can transform his physical energy into spiritual energy, which can cleanse the spectators of their sins and defilements.

The dance also familiarizes the audience with the different faces of the deities who will appear to them at the time of their deaths. That is, these deities are spiritual guides who can lead the deceased soul to higher realms during the intermediate state of life, called bardo. Introducing them within the dance helps minimize fear when they are encountered later on.

Following a long procession of monks and musicians in the main courtyard of the monastery, the dancers appear one by one. Each dancer holds a drum in his left hand and a curved drumstick in his right. Beating their drums, the dancers celebrate the victory of dharma. The dance has both a calm and contemplative part, representative of the peaceful deities, and a rapid and athletic part, where the dancers embody the wrathful deities. Ten monks make up the orchestra. The orchestra consists of cymbals, conch, oboes, large and shorter trumpets, a bone trumpet, and various sized drums. The dancers and musicians perform this meditative art form over nearly two and one-half hours exhibiting strenuous physical and spiritual discipline. For audiences, the Drametse Ngacham is a source of spiritual empowerment. By virtue of seeing the sacred dance, the viewer obtains blessings and acquires the qualities of spiritual attainment.

The villagers of Drametse are very proud of this dance that originated in their locality. The Drametse Tshechu brings the community together. For three days, the people of Drametse take a break from their regular routine; this is a time for fun and relaxation, for sharing food and hospitality. People of all ages eagerly look forward to the festival and to spending time with neighbours, family and friends who live outside the area. It is also an opportunity for the elders of the community to introduce to the younger generation the history of their shared faith as well as the social and cultural values transmitted by the dance.

Traditionally, the dancers of the Drametse Ngacham were gomchen (lay monks), but with other demands on their time they are no longer the principal practitioners of the sacred dance. Given the growing shortage of dancers, ordained monks from the monasteries themselves are receiving training in the dance forms. In order to safeguard this precious spiritual art form UNESCO, in collaboration with the Government of Bhutan and with the financial support of the Governments of Japan and Korea, initiated in January 2007 a project aimed at creating a sustainable foundation for the transmission of skills to the next generation. The activities include the survey and compilation of existing documents on the sacred dance, the production of audiovisual materials and publications, as well as training workshops for young dancers and the introduction of the Drametse Ngacham in schools throughout Bhutan.  At the recently held Drametse Tshechu in December 2008, the Drametse Ngacham generated special enthusiasm among the villagers as the monk AND LAY MONK dancers of the Thegchog Ogyen Namdroel Choeling Nyingmapa monastery were performing for the first time after a period of intensive training and wearing the new costumes and masks provided by the UNESCO project. 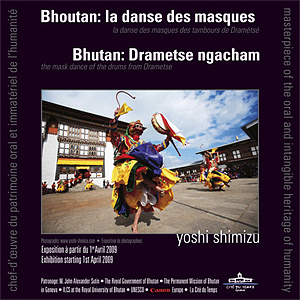